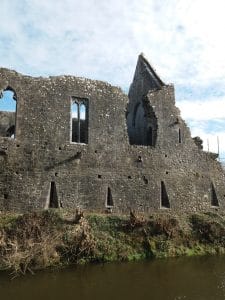 Gerald FitzGerald the 3rd Earl of Desmond founded the Franciscan Friary in about 1389 and is  considered to be one of the most beautiful complete ruins in the country. It includes magnificent cloisters with 12 arches on each side, a beautiful east window, mediaeval carvings, and a chapter room that is the final resting place of the martyrs Bishop Patrick O’Healy and Fr Conn O’Rourke. In 1579 the English commander  Sir  Nicholas  Malby  attacked the town and burned the friary, killing most of the friars, some in a gruesome fashion, and wrecked the ancestral tombs of the Desmonds. The monks returned to the friary only in 1627 but the community did not reach its former numbers until 1642. The community again abandoned the site in 1648 when Cromwell’s forces neared Askeaton, and did not return until the 1650s. The friary permanently closed in 1740.
The focal point of the town is the Desmond Castle, which stands in the centre of the town on a rocky island on the river Deel. This noble building has protected Askeaton since 1199, when the castle and its rights were given to Hamo de Valoignes, the Justiciary of Ireland between 1197 and 1199. In the Annals of Inisfallen, William de Burgo is recorded as having been granted the castle and estates by the king of Thomand, Dónal Mór. The Earls of Desmond, the FitzGeralds, held possession of the castle for over 200 years; it was the centre of their power, and they ruled Munster from there. Gerald FitzGerald, 15th Earl of Desmond, had a powerful stronghold at Askeaton in 1559 and so England saw him as a threat. The English tried to impose a policy of surrender on the Irish lords who rebelled and fought a war of defence across Munster. Gerald, known as The Rebel Earl, was popular among his followers, but as the atrocities of the English incursion grew unbearable they gradually abandoned him. He was murdered by Moriarty at Glenagenty, five miles east of Tralee. Sir Nicholas Malby unsuccessfully attacked the castle in 1579, which was then occupied by Lieutenant Patrick Purcell of the confederate Catholics. It was destroyed by the Cromwellian captain Daniel Axtell in 1652.