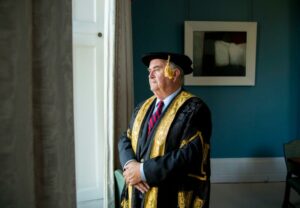 SADNESS has fallen over the Treaty County this Thursday following the death of one of its natives – the “extraordinary” former Chief Justice, John L. Murray.

Born in 1943, the Ennis Road native was educated at Crescent College and Rockwell College, and later at University College Dublin and the King’s Inns, Dublin.

During his time in third level education, he was twice elected president of the Union of Students of Ireland (USI).

He served on the Court of Justice of the European Communities in Luxembourg from 1991 to 1999, prior to his appointment to the Supreme Court in 1999.

In July 2004, he was appointed the tenth Chief Justice since the foundation of the State.

Tributes were paid at court sittings in Limerick this Thursday morning and in a statement, Minister for Justice, Simon Harris described Judge Murray as a “distinguished jurist”.

Minister Harris said he was saddened when he heard the news. “I have learned with great regret of the death of former Chief Justice John Murray and wish to express my deepest condolences to his wife Gabrielle, daughter Caitriona, son Brian, his grandchildren and wider family. He was rightly proud of the institutions of our State, and took pride in his own service

in one of its great institutions, the Supreme Court.”

The Limerick man, whose brother Michael is a former State Solicitor for Limerick city, served twice as Attorney General, and for a remarkable 24 years as a Judge

Heartfelt tributes have been paid this Thursday by many of Mr Murray’s respected colleagues and friends.

Having achieved the highest judicial office in the country, Brian described him as “the colossus – having achieved that office based on merit and ability, executing the office with efficiency, balance and courtesy at all times.”

As former Chancellor of the University of Limerick, Mr Murray has been memorialised by the President of UL, Prof Kerstin Mey.

“When John took on the role of Chancellor (in 2013) he said that ‘learning and education concern the soul of a nation’ and he was deeply committed to that vision and the provision of education. He will be sadly missed by his many colleagues and

friends at University of Limerick.”

Current Chancellor of UL Mary Harney has also commended Mr Murray’s “extraordinary work in drafting the University of Limerick Act 1989 which passed in June of that year and allowed UL to attain full university status.”

As he discussed his lasting effects on Limerick County through his career and his association with Munster rugby, Deputy O’Dea remarked that “it’s a very sad morning for Limerick.”

John Murray is survived by his wife Gabrielle and their two children.