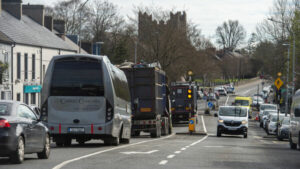 Two High Court actions have been brought against permission for a €450m Foynes to Limerick road project.

Approval granted to Limerick City and County Council for the development of a 35km stretch of road, including 17km of motorway bypassing Adare village, is under challenge from dairy farmer Paul Madden, from Blossom Hill, Rathkeale, and cybersecurity professional Ian Gilvarry, of Clonshirebeg, Adare.

The project has been in the works since 2014 when the council first engaged engineering consultants.

The men want the court to quash An Bord Pleanála’s August 2022 decision to give consent for the road, which Mr Gilvarry claims will cross land next to his house.

Mr Madden is also looking to overturn permission for other associated schemes that form part of the Foynes to Limerick Road, which led to a compulsory purchase order for part of the farm he owns with his wife.

He claims the approval of the schemes, and consequent authorisation of the compulsory order, was made without properly considering how he will move his 130 cows each day from one side of the motorway to the other through an underpass without increasing the risk of disease transmission to cattle, wildlife and humans.

It has taken more than 60 years to expand his herd to more than 130 cows, and his land supports 220 stock animals, he said in an affidavit.

The order will reduce his area of land and cut off the end of his farm from the farmyard, milking parlour and other lands, he said.

He wants the court to declare the board’s decision was irrational, disproportionate and contrary to articles of the Constitution and an EU directive concerning environmental impact assessments.

Both challengers, represented by Oisin Collins SC, instructed by O’Connell Clarke Solicitors, allege that Ireland, the attorney general, and the minister for housing, local government and heritage have failed to properly transpose into Irish law an EU directive concerning natural habitats.

This is due to an alleged failure to establish the necessary conservation measures and/or conservation objectives in the Curraghcase Woods, a special area of conservation.

They take issue with the board’s assessment of the development’s potential effects on wetland habitat, including the rare Desmoulin’s whorl snail.

Additionally, Mr Gilvarry alleges An Bord Pleanála acted beyond its powers by deciding the planning application without considering the expert scientific report he submitted ahead of an oral hearing on the scheme.

Mr Justice Richard Humphreys this week gave the applicants permission to pursue their actions in the High Court.

From the Irish Examiner 17th January 2023