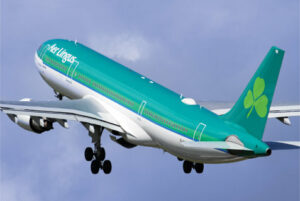 AER Lingus relayed some good news for Shannon this week at an Oireachtas Joint Committee on Transport hearing where it was also taken to task for opening a base in Manchester.

The good news for Shannon Airport came with the airline saying it will significantly increase its transatlantic capacity there next summer.  This is great news for tourism in the mid-west.

While it still has not as yet decided to resume the summer leisure routes that it had pre pandemic, the airline’s Chief Strategy & Planning Officer Reid Moody told the Oireachtas Joint Committee on Transport that there will be stronger US-Shannon links.

“There’ll be exactly the same frequency on Boston, but more capacity because there are more seats on the new aircraft.”

He said that there had been four weekly New York services pre pandemic, but it will be daily next year, while Aer Lingus will also maintain its three daily Heathrow services.

Mr Moody was very positive about the performance of Shannon.

“Shannon as a whole is doing really, really well overall. We see Shannon being up by 21% next summer with the overall additional seats and we’ll continue to work with the Shannon team.

“We have a really good relationship with the Shannon team and we’ll continue to work closely with them.”

At Wednesday’s sitting, Clare TD Cathal Crowe urged the airline to prioritise serving major sporting events in the region over the coming years.

“The Ryder Cup is coming to the Mid-West, there’s the prospect of the Tour de France being staged here, there are some pretty big events coming to the shores of Ireland and we want ye to position yourselves to the fore as others will, to receive people into Ireland and fly them globally.”

Responding, Mr Moody said, “It’s something we’re really interested in, our comms team and marketing team, both internally and in conjunction with the tourism bodies across the country, are really keen on exploiting all the opportunities that the opening stages of the Tour de France bring and the Ryder Cup.”

From an article in The Clare Champion…plus our note.