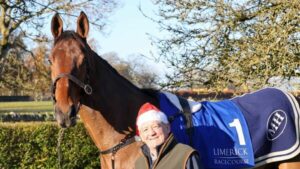 The man who famously trained Dorans Pride and Beef Or Salmon to a host of big-race victories turns 75.

They say you never forget your first and Michael Hourigan certainly hasn’t.

The man who famously trained Dorans Pride and Beef or Salmon to a host of big-race victories turns 75 on Thursday and will hit another landmark in 2023 when he marks 50 years as a handler.

He has enjoyed some spectacular successes along the way but a first winner was a long time coming. And, after a wait of six years, it’s no surprise he remembers just about every detail.

Hourigan was in fine form as he welcomed members of the racing media to his Lisaleen Stables in Patrickswell to launch Limerick’s annual four-day Christmas special.

“I love what I’m doing, I can be down here at half-six in the morning no problem,” he says. “I love every minute. It’s not work, it’s a way of life.”

His local track has been a happy hunting ground for Hourigan over the years but success at times has come at a cost, albeit a price he was more than happy to pay.

“Limerick has been very good to me. Somebody sponsored the leading trainer in Limerick I don’t know how many years ago but it was worth £500 one year and then it increased to £1,000 and I’d say I won it 10 or 15 times. We used to have a party in the Dunraven Arms for my owners with the £1,000 and sure it would cost another £1,000! Like backing horses, it was a loss straight away! But we had some great parties there.”

While most Irish sporting fans remember 1990 for Ireland’s fairytale World Cup adventure, Hourigan ruefully remembers it for other reasons.

“I remember winning it in 1990. It was done on a point system: First, second, and third. I was a good bit behind and I promised the kids that if we won it we’d all go on holidays. We might have been 30 or 40 points behind but it was quite exciting for the children. Every horse that got placed you got so many points. Going into the last day we were still behind but we got up and we won and we went to Santa Ponsa of all places. It was the worst holiday of my life. I was never in a worse place in my life: A concrete jungle.”

From the Irish Examiner