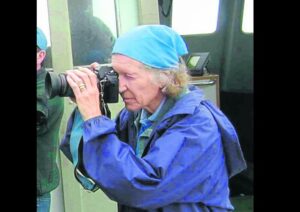 “She kept our club going. She was always there to cool things down”.

The words of Adrian Kelly from Adare, paying tribute to the lifetime president of the Limerick Camera Club, Mary Tarry, who has sadly passed away.

Mary was a stalwart of the amateur photographers group, who have met on a weekly basis in Limerick for decades.

She loved black-and-white photography, favouring the old Tri-X films. A traditionalist to the last, she always rejected digital cameras in favour of her old and trusted lens.

A country woman at heart, Mary lived at Islanmore Stud Farm in Croom and was heavily involved in the Hunt in Limerick, with horses often forming the centre-piece of her work.

Adrian, who lives in Adare, and knew Mary for almost 40 years, said: “Mary had access to the hunting group in Limerick, she would love photographing the Hunt. Most of her shots I can remember were of static horses. Although she had a few taken of horses going over jumps into water. They were her ‘action shots’ I suppose.”

But there’s far more to say about a lady who also loved photographing flowers and wildlife – not least her service to Limerick Camera Club.

“She used to invite us out to her home in Croom. Through that, sometimes we held our committee meetings there,” Adrian explained.

When the club held competitions, they were able to attract some of the best judges, Mary offering them a place to stay and the club to exhibit to defray the cost of hiring a hotel.

“With the saving we made, we were able to have judges we could not normally afford to have. She used to open her house for one week of the year. Due to this, she always kept her garden absolutely immaculate,” he added.

Indeed, around the year 2000, Limerick Camera Club members decided to appoint her president of the club for life in recognition of her service.

“She was very warm and welcoming and had a very pleasant disposition,” remarked Ivan O’Riordan, the current public relations officer of the camera club.

The beloved wife of the late Tony, she’s sadly missed by her loving family, Charles, Caroline and Jack, as well as her grandchildren and family circle.

She was laid to rest in the old cemetery at Adare following funeral service at St Nicholas Church.

May she rest in peace.