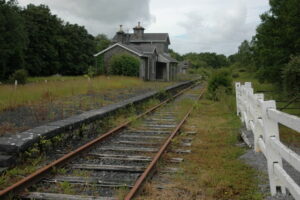 COUNCIL chief executive of Dr Pat Daly believes Limerick’s enhanced rail network could be in place by the time the Ryder Cup is held.

One of the world’s top golfing tournaments is due at Adare Manor five years from now, and while there is scepticism about whether the road bypass of the village will be completed in that time, Dr Daly believes “with a fair wind”, Limerick’s rail transport could be improved by then.

Colbert Station is undergoing a major facelift, with new stations expected to serve Moyross and Ballysimon. On top of this, there will be more frequent trains on the Ballybrophy line which takes in Castleconnell and Nenagh, plus the Ennis route, serving Sixmilebridge.

There are calls for a spur to go from there to Shannon Airport, making the local airport the first in the country to be linked by rail.

Improvements are to be made to the line between Limerick and Limerick Junction, while Irish Rail is seeking expressions of interest to rebuild the Foynes line, which is out of action since 2001 – this could serve Rathbane on the city’s southside.

“They are doing their feasibility and planning. I think we will see [these improvements] sooner rather than later. Part of the challenge will be with the Ryder Cup coming in 2027. Can we get some of those key rail lines in place? I think it’s doable if there is a fair wind with us. I think it will happen,” the council boss said.

Green Party TD Brian Leddin, who has championed the idea of rail improvements in Limerick agreed the Ryder Cup in 2027 is a good yardstick by which to measure improvements.

“I think it’s doable. I think the thinking around transport is changing and development is changing,” he said.

Independent rural Limerick TD Richard O’Donoghue called for Irish Rail to place a halt at Kilmallock to provide the medieval town with a rail link once again.

He pointed out that the train line passes through Kilmallock, and stops at nearby Charleville on the Cork line.

“The [station] building is still there. The mart is adjacent to it. Can you imagine if they put this infrastructure into the likes of Kilmallock. What would it do for the fire training station we were looking at in Kilmallock? You have the likes of Celtic Engineering. Go further out, and you’d see people from Kilfinane, from Hospital and Bruff. Anybody could use it as transport to get into town. The rail line is there, all it needs is a stop-off,” the TD added.