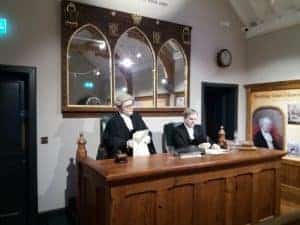 THE case of man found drunk and disorderly in Newcastle West almost a century ago was re-enacted in court this Saturday.

As part of An Garda Siochana’s centenary commemorations, a judge sat at the former Adare District Co Judge Carol Anne Coolican heard the case of a Daniel Kelly from Rathkeale, who pleaded guilty while drunk of disorderly behaviour in Limerick’s county town back on October 3, 1923.

The defendent was duly convicted and ordered to pay a fine of 40 shillings and 2/6 in costs – or else face time in Tralee Male Gaol.

In an added twist, the daughter of Garda Michael McKenna, who as one of the first five gardai in Newcastle West was a witness to the case also witnessed its retelling.

Barbara McKenna travelled across from Sheffield in England to be part of the occasion.

The commemoration came almost 100 years to the day the first six garda officers arrived to serve the Newcastle West district, for which Adare falls under.

The former Adare district court is located above Aunt Lena’s pub in the village, and the event coincided with an open day at the area’s garda station.

Here, Limerick units were on display including the armed support division, scenes of crime and public order units.

A number of local politicians were in attendance including Minister of State Niall Collins, Independent TD Richard O’Donoghue plus local councillors Bridie Collins and Kevin Sheahan, himself a former detective garda.

A floral wreath was laid outside Adare garda station as officers remembered their former colleague Jerry McCabe, who was murdered by members of the Provisional IRA in 1996.