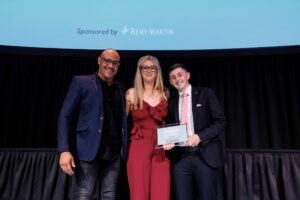 The team at Adare Manor are celebrating as The Oak Room was named Hotel Restaurant of the Year at the FOOD&WINE Awards on Sunday afternoon at a glamorous event held in Dublin’s Mansion House.

Now in their 21st year, the FOOD&WINE Awards are the most highly-anticipated awards for the hospitality industry, nominated by the public and considered for accolades by a national judging panel of industry experts, critics and peers. Helmed by Executive Head Chef Mike Tweedie, the Michelin starred Oak Room won this award previously in 2019.

Commenting on the win, General Manager Brendan O’Connor said, “We are delighted to have won Hotel Restaurant of the Year for a second time at the FOOD&WINE Awards. We see how hard Mike Tweedie and his wonderful team in The Oak Room work every day and the care and passion that goes into every service and each guests’ experience. To be nominated by our guests and then judged by some of the industry’s best chefs, food writers and restaurant critics, and to come out on top is a truly brilliant result for everyone here at Adare Manor.”

« Former Limerick TD and Fair City star announce ‘miracle’ as twins on the way.Celebrations in Adare as Tidy Towns Award is presented »