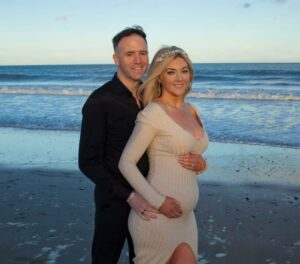 It’s a double surprise for former Limerick TD Tom Neville and his partner Jenny Dixon as they announce that “through an act of god” twins are on the way.

Jenny, who previously starred as KerriAnn on Fair City, took to social media to tell of an “emotional rollercoaster” that had led to the couple learning that they are 17 weeks pregnant, with twins.

The London-based actress said: “Just when we thought it may never happen. It happens. Some kind of sacred magic. Faith, positivity, determination and an act of god.”

The pair, who wed in Dublin in July 2019, recently moved from Limerick to London, so that Tom, a former Fine Gael TD could take up an exciting new opportunity with social media giants TikTok.

Taking to inform his own followers, the former Limerick Deputy, Croagh native and Crescent College Comprehensive graduate said: “Just when we thought it may never happen. It happens and it happens x2. Can’t wait to meet the twins.”

Hearty congratulations have been pouring in from the political and acting spheres, not to mention strong messages of support from the Limerick community.

Celia Holman Lee, Rosanna Davidson and Lisa Jordan have all expressed their delight at Jenny and Tom’s announcement.