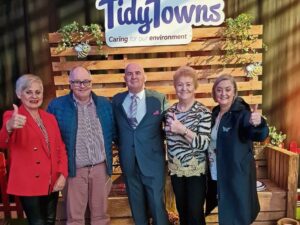 Adare Tidy was celebrating on the double over the bank holiday weekend after it won two major prizes. Less than 72 hours after being named the overall winner of Limerick Going for Gold 2022, members of the committee travelled to the RDS in Dublin where they collected a gold medal at the national Tidy Towns awards. Friday’s event at the RDS was the first full-scale awards ceremony since the onset of Covid-19 and this year’s competition received the third-highest number of entries in its almost 65-year history.

The Adjudicator’s report for Adare, which saw its points total increase from 343 to 356, notes the volume of traffic that passes through the village each day and how much a bypass is needed.

The work of the ten-strong committee and the contribution of the up to 80 volunteers – many of whom carry out litter-picking at 6am on Sundays – was also highlighted by the adjudicators who stated they were impressed by a number of specific projects.

“It is wonderful to see the care and attention given to the many first class heritage elements. This is clearly demonstrated by the renovation of the Countess Dunraven fountain (which looked lovely) and the restoration of the Courthouse and the second cottage – both of which are fabulous buildings that occupy very prominent locations in Adare.”

Members of the Adare Tidy Towns committee at the national awards which took place at the RDS in Dublin | PICTURE: Twitter/@adaretidytowns