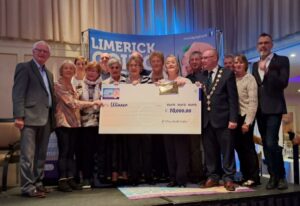 Adare Tidy Towns took home the top prize of €10,000 after it was named the overall winner of Limerick Going for Gold 2022

The awards ceremony, which was MC’d by Richard Lynch, took place at the Limerick Strand Hotel this Tuesday night – the first since Covid-19 hit in early 2020.

Adare Tidy Towns, which was one of six judges’ wildcards to qualify for the grand final, will now receive the top prize of €10,000 to be used for the betterment of the local community.

Kilteely Tidy Towns will receive a €5,000 prize after it was named the overall winner of the Limerick Bee Friends in Bloom competition.

The Going for Gold competition is sponsored by the JP McManus Charitable Foundation and has a total prize pool of €60,000 across all categories and is organised by Limerick City and County Council.

« WIN a Trip to Disneyland ParisInaugural global conference for Adare »