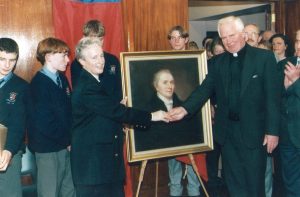 IT WAS fitting that a priest who took such special care of those who were sick received a beautiful send-off surrounded by family and friends, including Fr Chris O’Donnell, at his side.

Fr Joe Noonan, aged 81, of Ballyelan, Ballingarry, went to his God on Saturday, October 8. His funeral Mass was said by Bishop Brendan Leahy and concelebrated by 40 priests in his last parish of Adare on Tuesday.

Canon John O’Shea, who said the homily at Fr Noonan’s funeral, remembered the life of a priest and former teacher and principal of St Munchin’s College.

“It is with a heavy heart and a great sadness that we gather to celebrate the life of Fr Joe Noonan and give thanks for all the lights he lit as we bid farewell to Fr Joe.

“He was a great priest of our diocese who left his mark wherever he was asked to minister. His ministry was filled with kindness, compassion and strength. He was loved deeply by many,” said Canon O’Shea, who added that the condolences received following Fr Noonan’s passing have been amazing.

“What endeared Fr Joe to both young and old was his humility – the way he carried his achievements. He was always sincere and always able to treat others with tremendous dignity and respect.

“I have been overawed but not surprised at the way people have remembered Fr Joe, especially in his lifelong dedication and care for the sick. In both parishes (Kilcornan and Adare) he took special care of those who were sick,” said Fr O’Shea, who read out one such tribute, “He had the ability to see the world through another person’s lens and yet talk them out of the pain with words of kindness”.

What a mark he has left, said Canon O’Shea.

“I have spoken to former pupils who spoke of the esteem he held each student in and enabled them to become their best selves. He was their teacher, mentor and friend.

“The impact he has made on so many people’s lives has been tremendous and for this we give glory and thanks to God. Coming out of St Munchin’s college after 32 years must have been very difficult for him. Twenty seven of those years began with early morning rising for 7.30am Mass as chaplain to the FCJ community in Laurel Hill where he is proud to have one his past pupils principal now (James Collins),” said Canon O’Shea, who also spoke of Fr Noonan’s love of the game of rugby and his time as a Munster and Irish schoolboy selector.
St Munchin’s College was a constant in most of Fr Noonan’s life and the current principal, David Quilter, wrote a glowing tribute on social media.

“It was with great sadness that we learnt of the passing of Fr Joseph Noonan, retired teacher and principal of St Munchin’s College. Fr Noonan started as a teacher of science, maths and religion in 1966 and was principal from September 1993 up to April 1998

“Apart from being well regarded by his students, colleagues and fellow priests, Fr Noonan was good humoured and considerate. It has often been said that he was so progressive and ahead of his time in so many ways,” wrote Mr Quilter, who passed on their sincere condolences, prayers and thoughts to the extended Noonan family.