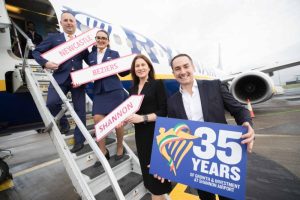 RYANAIR has announced it will be introducing new routes from Shannon next summer, and adding a third aircraft from the base. This is great news holiday makers living in the mid-west.

In a boost to the airport, the budget carrier will service Newcastle-upon-Tyne in north-east England and Béziers in the south of France from next summer.

The airline says the addition of another aircraft in Shannon will create 30 new, direct jobs, and a €303m investment. It also means Ryanair will provide Shannon with more than 180 flights a week.

Ryanair’s director of commercial Jason McGuinness said: “As Ireland’s number one airline, Ryanair is delighted to celebrate 35 years of successful operations at Shannon Airport with the announcement of a third based aircraft and bigger schedule for Summer 2023 that offers over 180 weekly flights across 24 routes, including two new routes to Béziers and Newcastle.”

Shannon Airport group chief executive Mary Considine added: “We are delighted with today’s announcement. The addition of two new routes and a third based aircraft here at Shannon demonstrates Ryanair’s continued commitment and is another vote of confidence in our airport. We know our customers will be excited by these two new destinations.”

Ryanair currently operates services between Shannon and the British capital city of London, plus Birmingham, Edinburgh and Manchester.

Marseille in France is also connected to the Mid-West, as are the Greek resort of Corfu, Budapest in Hungary, and Turin in Italy.

« Adare Manor is voted the #1 Resort in the WorldThe Mustard Seed picks up a César Award. »