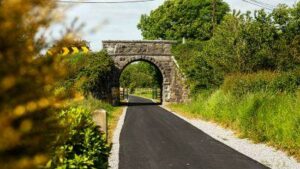 TECHNICAL advisors have been appointed to examine the feasibility of extending the Limerick Greenway beyond Rathkeale towards the city.
Currently, the Limerick Greenway links Rathkeale with Newcastle West. But since its reopening in 2021, its popularity has led to more money being made available from government for an extension.
Funding was pledged for a study of expanding the greenway through into the city centre via Ballingrane, Adare and Patrickswell.

At this month’s full council meeting, Fine Gael councillor Dan McSweeney requested an update on the extension of the Greenway to Patrickswell. In a written response provided by the Mid-West National Road Design Office section of the local authority, it was revealed the feasibility study is “well advanced” and is currently looking at a number of “indicative” scenarios.
Senior executive engineer David E Leahy said the impact of the recent announcement by CIE to re-open the Limerick to Foynes rail line is also being taken into account.

The feasibility study is expected to conclude by the end of this year.

« Lack of agreement with farmers could delay Adare Bypass.Adare Manor is voted the #1 Resort in the World »