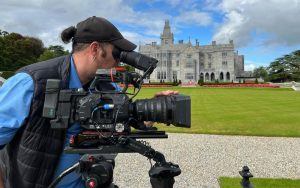 SPANISH golfers will want to pack their clubs for a trip to Limerick as Adare Manor’s golf course is set to be showcased on a Spanish television show.

The show which is all about golf will premiere the episode later this autumn to an audience of around 15,000 Spanish viewers.

The crew from the television programme were invited to film in Limerick and Clare by Tourism Ireland and Fáilte Ireland.

Tourism Ireland’s Manager for Spain Susan Bolger commented: “Tourism Ireland was delighted to invite the crew from Teledeporte to come and film in the Mid West for its Hola Golf programme.”

“It’s a great way of showcasing this part of Ireland and our superb golf, inspiring Spanish golfers to come and experience the destination for themselves,” Ms Bolger said.

“Golf is the world’s largest sports-related travel market and one that Tourism Ireland is committed to growing. A key message in our golf promotions is the Ryder Cup taking place at Adare Manor in 2027,” Ms Bolger said.

Tourism Ireland is undertaking an extensive programme of promotional activity in Spain this autumn.

Publicity and broadcasts like this are a key element of the programme, to encourage travellers in Spain to put the island of Ireland on their future holiday wish-list.

Spain is the fifth-largest market for overseas tourism to the island of Ireland.

In total in 2019, Tourism Ireland welcomed 11.3 million overseas visitors to the island of Ireland, delivering a revenue of over €5.9 billion.

From the Limerick Leader including photograph.