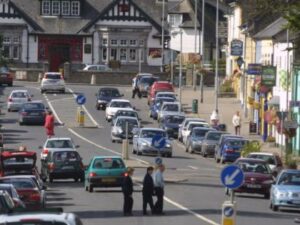 AN BORD Pleanála has formally approved the proposed multi-million euro Limerick to Foynes road which includes a bypass of several towns and villages including Adare.

When complete, the 35km road will connect the Port of Foynes to the current motorway network near Limerick city.

The development will include around 15.6km of dual carriageway between Foynes and Rathkeale along with more than 17Km of motorway between Rathkeale and the existing motorway network at Attyflin near Patrickswell.

The multimillion euro project will also see the development of a service area for Heavy Goods Vehicles near Foynes and the construction of more than 60 bridges and underpasses, including a 200 metre-long clean-span bridge over the River Maigue at Adare.

Limerick City and County Council first lodged the application with An Bord Pleanála in December 2019 and a number of objections, mainly from property owners who will be impacted, were subsequently lodged.

An oral hearing took place in February 2021 and the decision was delayed on several occasions – sparking considerable criticism of An Bord Pleanála in political and business circles.

A report, totalling more than 500 pages, was prepared by a planning inspector and it was confirmed, earlier this month, a decision was imminent.

According to documents, published this Wednesday, the formal decision to approve the project was made on Tuesday – subject to a number of conditions.

Councillor Adam Teskey, who was highly critical of the delay in making a decision, is one of those who has welcomed the news.

“This has gone on too long but I’m glad that the way has now been cleared and I call on government to make sure the money is new made available to allow the works to get started,” he said.

According to the planning Inspector’s report, the new road will reduce journey times between Foynes, Rathkeale, Adare and Limerick by between nine and 15 minutes.

“Without the project in place, negative environmental impacts would continue due to high traffic volumes through the villages along the existing N21 corridor at Adare and Croagh, and also on the N69 at Kilcornan, Kildimo, Clarina and Mungret. This would lead to a worsening of adverse impacts on communities along the routes in terms of safety and amenity. Significant traffic delays and congestion would continue and worsen through Adare during peak times,” she added.

From the Limerick Leader / David Hurley