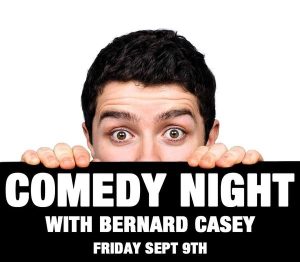 Book Friday the 9th of September at the Treehouse, Woodlands House Hotel, Adare for a night of laughter with Bernard Casey followed by a DJ till late.

Bernard Casey is one of Ireland’s leading comedy stars. With over 100,000 online followers and 10 million views, Bernard is the man behind such videos as the Polish/Irish Barman, the Irish Listening Test and his hugely popular characters the Local Gossip & the Nephew.

‘Bernard is a funny, likeable and original comedian, we hope he doesn’t get too popular….’ – Foil, Arms & Hog

Tickets are €25 and available from at this link:
https://www.woodlands-hotel.ie/…/comedy-night-bernard…/