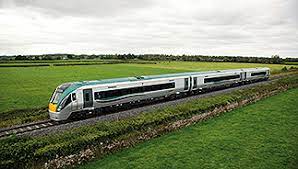 A PROPOSED redevelopment of a 42 kilometres rail line between Limerick city and the Port of Foynes has received a boost. Irish Rail is seeking expressions of interest for contractors to rebuild the link which has been out of action since 2001. It’s hoped the tender contract will be awarded later this year, with an 18 month construction period then expected on the line which also covers the Mungret area.
Councillor Emmett O’Brien, who represents Foynes on the local authority, said: “There is a move nationally away from car to public transport, and significantly so since it was announced the Ryder Cup is going to be in Adare in 2027. It’s obvious people coming to Shannon we have a good rail network. It’ll be a slow process, but really and truly it’s the way to go.”

The Limerick-Foynes line was opened in April 1858 by the Great Southern and Western Railway. Passenger traffic ended in 1963, with freight trains no longer using the line after the year 2000. This saw the branch line disconnected from the broader Irish Rail network. However, there have been widespread calls for its re-opening given much of the track remains in place. The Shannon Foynes Port Company has said the link would represent a huge boost to plans to make the Shannon Estuary a global floating offshore wind energy and Atlantic transhipment hub.

It’s anticipated the re-opening of the line – a project which enjoys the support of Transport Minister Eamon Ryan – would cost in the region of €45m.

In a tender document, Irish Rail has detailed what would be involved. The proposed construction contract, the company says, will include earthworks, the installation of sleepers and rail – supplied by Irish Rail – and also the maintenance and renewal of bridges, culverts, fencing and the road infrastructure at public road level crossings. A contractor will be asked to clear vegetation, and the removal of existing track, a new ballast-bed will be needed, while bridges along the route will need to be made safe. There are 13 level crossings along the route which will need to be renewed, as will boundary fencing and drainage, plus the installation of service routes for future line signalling, telecoms infrastructure and level-crossing automation.

FROM THE LIMERICK LEADER