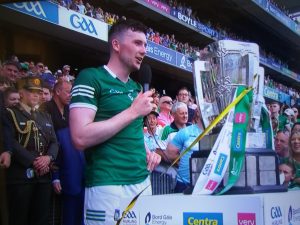 Limerick join the elite list of counties to do the three-in-a-row! Kilkenny put them to the pin of their collar in that second half with two goals, but the Treaty men captained by Adare’s Declan Hannon always seemed to be able to find a score when the Cats came at them.  Full-time: Kilkenny 2-26 Limerick 1-31. The period immediately after the second goal, when Kilkenny drew level, was the real winning of the game. What more can be said about this team? Questions will be asked now as to how many they can go on and win?

The all-conquering three-in-a-row heroes will return to a tumultuous welcome on Monday evening at the TUS Gaelic Grounds as it hosts the All-Ireland senior hurling champions’ homecoming following this Sunday’s victory in Croke Park.

Monday’s victory salute will be an opportunity for the people of Limerick to unleash three years of unbridled All-Ireland joy into one magical event.

A night of unforgettable festivities is planned, rivalling the scenes that greeted the 2018 champions when they returned after claiming their first Liam MacCarthy Cup in 45 years, with some of Limerick and Ireland’s finest contemporary musical artists joining the celebrations.

Limerick City and County Council in association with Limerick GAA are inviting supporters to join the family-friendly party at the homecoming at the TUS Gaelic Grounds.