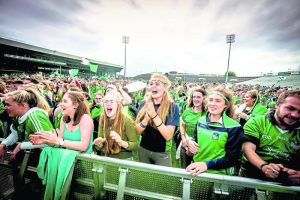 Extra details have been revealed for the big screen event taking place this Sunday for Limerick hurling fans who won’t be heading to Croke Park for the All-Ireland hurling final.

Fans will flock to the TUS Gaelic Grounds from early on Sunday afternoon for the special match screening event, similar to that hosted in 2018 when 20,000 people enjoyed an unforgettable day on the Ennis Road when Limerick won the first of what is hoped, come Sunday evening, will be the fourth title in five years.

Among the latest initiatives confirmed today that will help create this special atmosphere will be a monster face-painting programme for children and adults alike, with over 20 face-painters on standby and ready to get every single person with the Limerick colours on their face from the very start.

Live band Acoustra will take to the stage just after the doors open at 2pm and deliver a party-starting set of folk and rock.

Master of ceremonies for the day has also been announced, with Paul Prendeville from Live 95fm to take the microphone and whip up the atmosphere even more before the match previews start across not just one but three giant screens.

The Sunday Game Live will be broadcast on the big screens, including half-time and post-match analysis, ensuring there will be no better place to watch the match in Limerick city or county!

An unique aspect of the event will be the link direct to Croke Park where both crowds will be able to see each other and the team will know and be inspired by the support back home, which – as we have seen before – can propel to even greater heights.

“Presented by Limerick GAA in partnership with Limerick City and County Council, there is no place better to show your support for Limerick’s hurling heroes than at the Big Screen at TUS Gaelic Grounds and help create a magical atmosphere that only happens on All-Ireland final Sundays,” said a spokesperson.

With gates opening at 2pm there will be live music and DJs cranking up the crowd in the lead up to the throw in at 3.30pm. This is an event for all ages. Tickets are on sale from just €10 at Ticketmaster.ie now. Family tickets are €25 for two adults and three children with €5 for each additional child.  Under 16s must be accompanied.