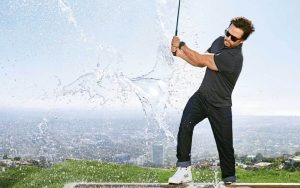 HOLLYWOOD superstar Mark Wahlberg has been testing out the course at Adare Manor ahead of his appearance at the JP McManus Pro-Am.

The Ted star is in Limerick with his sons Brendan and Michael as well as some friends ahead of the golf competition next month.

The actor is no stranger to Adare and has previously played at the tournament alongside other famous faces.

In a video posted on Instagram, the 50 year-old said he was “back in the homeland” and called the course at Adare Manor “the best in Europe and possibly the entire world”.

Earlier this week it was announced that the world number one and reigning Masters champion Scottie Scheffler is the latest addition to the line-up for the competition.