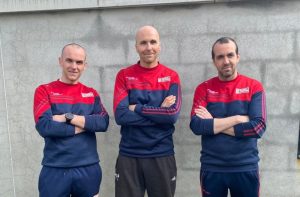 LIMERICK senior hurling coach Paul Kinnerk plans his training sessions around a games based approach. Just like any walk of like, others are keen to learn from the standard bearers. A new GAA coaching website www.gamesensecoaching.com   is doing just that
Run by three Adare brothers Stephen, Peter and David Lavin, gamesensecoaching.com is offering a whole avenue for GAA coaches from those involved with children to adults.

“We’re not saying that is the only way to do things but we believe strongly that it is the best way,” explains Stephen Lavin, a former Limerick footballer and hurler.

“We have come from the old-school way of things – out to the cone and back and we just think that there is a better way and that people will enjoy this way a little bit more because it’s more interactive. It’s games with a purpose – all skills based games that we think are better than having everyone lined up behind a cone,” outlines the Adare man.

The three brothers have worked in the Limerick Underage Football Academy where Paul Kinnerk is the Head of Coaching.

“The three of us were working in the academy and it’s not that Paul (Kinnerk) would give you stuff but he would give brilliant feedback on sessions. Initially we were thinking of a book as a resource for people and then it was Jim Donovan (former Limerick footballer) who suggested a website that people could sign up to. We already had a couple of hundred games from our football work and then this software called Tactical Pad made it very easy to do up animated videos to show how the games work.”

So now, coaches of all levels can log into the website, find the skill they wish to teach, select a game, print it off, then share with fellow coaches ahead of the training session.

“It’s just about trying to make the sessions a little bit more enjoyable. You have parents getting involved now and I would say that this is an investment in your kids. They want to do right by their kids and want their kids to do well and these parents are often hugely enthusiastic but don’t have a whole pile of coaching experience behind them. This is only a resource and the real learning is doing it and then reflecting on it,” said Stephen.

Read the full article in the Limerick Leader.