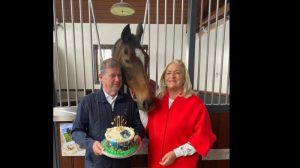 He captured the hearts of the nation with his triumphant displays on the racetrack, and this week the beloved hurdler, Istabraq, enjoyed some well-deserved TLC on his 30th birthday.

Owners JP and Noreen McManus along with horse racing legend AP McCoy and stable staff at Martinstown Stud, Kilmallock joined in for a rendition of Happy Birthday to toast the milestone birthday.

There were personalised banners, cupcakes and streamers, and a cake for the much-feted champion hurdler.

“No need to wonder who the favourite horse is!!! Happy 30th birthday Istabraq,” tweeted AP McCoy after the celebration.

Born on May 23, 1992, Istabraq is synonymous with JP McManus’ green and gold silks, and jockey Charlie Swan.

He, of course, secured three successive Champion Hurdle victories at the Cheltenham Festival from 1998 to 2000 for the McManus’. The cancellation of the meeting in 2001 due to foot and mouth disease almost certainly robbed him of a fourth Cotswolds crown.

He has been enjoying a leisurely retirement at his owner’s Limerick home, Martinstown Stud.