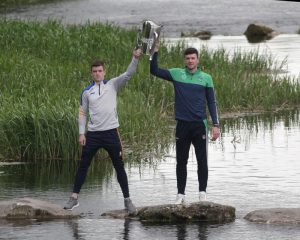 The new Mick Mackey Cup will be presented for the first time to the 2022 Munster SHC winners when Limerick and Clare meet on Sunday June 5 in Thurles.

Limerick GAA Chairman John Cregan said ”Limerick County Board are delighted that the Munster Council have agreed to perpetuate the memory of Limerick’s finest hurler, Mick Mackey of Ahane.”

“I would like to thank the other counties in Munster who supported the motion regarding the new name for the Munster Senior Hurling Cup. As Limerick are currently in the throes of one of our finest eras, there are many comparisons with the Limerick team of the 1930s and 1940s and the Mick Mackey Cup will keep the memory of that great Limerick team to the forefront,” said Cregan

Munster GAA formally passed a motion to name the Munster Senior Hurling Cup after former Ahane, Limerick and Munster hurler Mick Mackey at a Council meeting in March 2021. “On behalf of the Munster Council, I am delighted that the Mackey name will be indelibly linked with the winners of the Munster Senior Hurling Championship. The legend of Mick Mackey and his contribution to hurling in the 1930s and 1940s is well known. However, Mick’s contribution to the GAA didn’t end with his playing days and he served as the Limerick delegate to Munster Council for many years. I would like to thank Limerick GAA County Board for commissioning the Mick Mackey Cup and I look forward to presenting the trophy to the captain of the Munster Hurling champions on Sunday week,” said Munster GAA Chairman Ger Ryan at the launch.