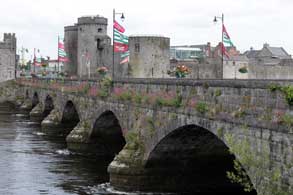 THE NEW owners of King John’s Castle have stated their ambition is to draw in more Limerick families to the 800-year-old city centre attraction.

Discover Limerick DAC, a wholly-owned subsidiary of Limerick City and County Council is looking to pull in local Limerick families in a bid to replenish depleted visitor numbers.

In a ceremony, marking the transfer of ownership from Shannon Heritage, Mayor Daniel Butler said he’s confident the council’s ambitions for the castle can become a reality.

He stressed that leading up to the pandemic, the attraction experienced a year-on-year growth in visitor numbers.

“What really struck me during that period was the amount of Limerick people, despite being in their fifties, sixties or seventies, saying it was their first time in King John’s Castle. That is something we need to address quickly,” the First Citizen stated.

Dr Pat Daly, Chief Executive of the local authority, described the castle as a “precious jewel” in Limerick and promised to polish and present it to the people of Limerick in the right way.

He echoed the sentiments of Mayor Butler, stating that there is now an “emphasis to draw in people from the local community.”

Tim O’Connor, Interim Chair of the Board of Discover Limerick DAC, described the castle as a magnificent feat of engineering from our ancestors.

“We were just reflecting on the history. Imagine something in today’s world, the flux of being 800 years old or more and is still standing and solid and so powerful. It’s our turn now to hold the castle. Not only are we holding it for the Limerick people of today but for future generations to come,” he said.

From the limerick Leader