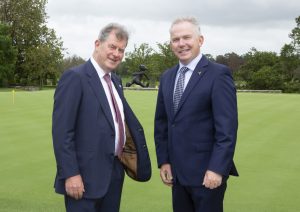 Adare Manor, one of Ireland’s leading five-star resorts, has announced the retirement of its CEO, Colm Hannon, after 26 years working with the McManus family.

Colm Hannon has held the post of CEO at Adare Manor since 2015. He oversaw the extensive 21-month restoration, refurbishment, and expansion project of Adare Manor ahead of its reopening in November 2017, and the hotel’s successful bid to host the Ryder Cup in 2027.

Prior to his role at Adare Manor, Mr Hannon was General Manager for Sandy Lane Resort in Barbados and Resident Manager for Cambridge Beaches Bermuda. Since 2005, he has also held the role of CEO at Luttrellstown Castle, from which he will also retire.

Home to the Michelin-starred Oak Room restaurant, and exclusive wellness offerings including Ireland’s only 111SKIN spa; Adare Manor has over 500 team members and will play host to the Ryder Cup in 2027, which will be only the second time that Ireland has staged the biennial golf tournament between Europe and the United States.

Paying tribute to Colm Hannon, Adare Manor owner JP McManus said: “I’d like to thank Colm for his stellar 26-years of service and his outstanding contribution to Adare Manor and wish him well in his retirement. His leadership at Adare Manor has had a profoundly positive influence on the hotel, our team, and the local community. He has overseen several successful ventures on behalf of Adare Manor, such as the detailed renovation and restoration of the hotel in 2016 and our successful bid to host the Ryder Cup in 2027. Colm will be sincerely missed by all of the team at Adare Manor, and we wish him the very best in all of his future endeavours.”

Commenting on his retirement, Adare Manor CEO Colm Hannon said: “I’d like to thank JP and the McManus family for a wonderful and rewarding 26 years. It has been a privilege to oversee such a special project at Adare Manor and I am incredibly grateful for all that we have achieved together. I wish the team in Adare Manor all the best in hosting exciting upcoming events such as the JP McManus Pro-Am and the 2027 Ryder Cup, as the hotel continues to build its legacy as one of Ireland’s leading five-star resorts.” Adare Manor will continue to be led by its senior management team, with no immediate appointment to the role of CEO.