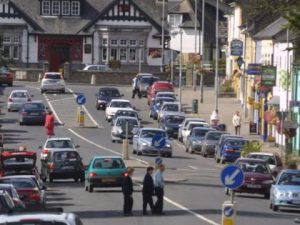 Adare residents are fearful that their village is becoming “more of a commodity than a community”.
That is according to Councillor Kevin Sheahan, Cathaoirleach of the Municipal District of Adare-Rathkeale. Speaking at a Municipal District meeting last week, Cllr Sheahan said he had been contacted by a number of locals in the village who have concerns regarding the Adare Public Realm Plan. Cllr Adam Teskey and Cllr Stephen Keary said they had also been contacted by locals who raised their concerns regarding the proposed plan. The plan indicates, in broad terms, the role of the public realm including key urban spaces, pedestrian and cycling priority linkages and streetscape enhancement for the village.

However, a number of issues have been raised including the introduction of cycle lanes in the village and the effects of the planned Adare Bypass. A public consultation regarding the plan was held in the village, however, Cllr Keary said it was poorly attended due to the pandemic and the public being unaware that it was taking place.

Public submissions in relation to the plan, which was first shown to councillors in 2021, can be made until this Thursday, April 21.

Councillors have proposed that the deadline for submissions be extended and another public consultation event should be held. Cllr Kevin Sheahan said while it is “a plan” it is not “the plan” and that locals should raise their concerns with the Local Authority.

A discussion was also had on whether the plan should be put on hold until after the construction of the Adare Bypass to see the effect it has on the village.

Cllr Adam Teskey called for a special meeting to be called on the matter and questioned where the funding for the plan was coming from while accusing senior engineers of having no regard for public money. Cllr Teskey also accused Cllr Sheahan and Cllr Emmett O’Brien of “playing politics” in relation to the issue which both councillors vehemently denied.