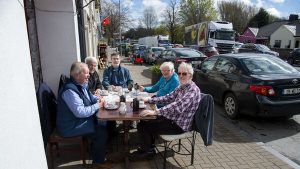 Just over 1,100 people in Adare village are waiting for May 27 with bated breath. This is when they are due to be told about whether a route that would bypass the notorious Co Limerick bottleneck has been approved. One of those waiting for this date is Stephen Keary, writes the Irish Examiner.
The Fine Gael councillor and former Mayor of Limerick City and County Council must drive from his home in Croagh, just outside the village, through the village to get to work in Limerick.
“It is extremely, extremely busy with traffic and it’s a nightmare,” he says.
“I travel it most days from home to Limerick and I must go through Adare and it’s a nightmare because of congestion.
“I think there are as many as 17,000 vehicles passing through it every day and it so desperately needs a bypass.”
The oral hearing focusing on the route concluded on February 23 last year and An Bord Pleanála was due to decide last November, but that was delayed to the end of January before being pushed out again to March 25.
“Hopefully May 27 is the final date,” says Mr Keary.
Sean Collins, who has run the Sean Collins Bar on Adare’s Main Street for the past 35 years, dubs the village “the most beautiful traffic jam in Ireland”.
Only around 2% of traffic stops there, he says.
“It’s used as a motorway,” he says wearily.
“You’re trying to drink a cup of coffee or eat a meal outside the door and there are 10 trucks, one after another, passing by.
“I am at the wrong end of a good town.
“When the trucks come around the bend, they are changing into second and third gear or when they’re coming down the street, they’re braking heavy and hard and changing down gears.
“So, it’s just dust, dust, and more dust off the trucks.”
He points out that there are around 30,000 people employed in Limerick city in decent jobs and very few of them bother coming to Adare because you simply don’t know how long it will take to get in and out.
“It could be 10 minutes, it could be three quarters of an hour,” he explains.
“If Adare was on the outskirts of Cork city, Cork people would be all over it like rash.
“You can see that with Kinsale; the amount of Cork people who go to Kinsale. It’s full of Cork city people.
“While they go there all the time, it doesn’t seem to happen with Limerick city people and Adare.” He adds: “Don’t get me wrong, we do well out of people coming out to visit, but we would get more if it wasn’t for the congestion.”
Officially known as the Foynes to Limerick Road (including Adare Bypass), the proposed project is a 35km stretch connecting Foynes Port to the motorway network of the N21, N20, and M20 near Limerick.
The €450m road development consists of 15.6km of dual carriageway from Foynes to Rathkeale, with about 1.9km of single carriageway between Ballyclogh and Askeaton.
It also includes about 17.5km of motorway from Rathkeale to Attyflin, which is near Ballybronogue on the N20 and N21 roundabout, and south of Patrickswell on the M20.
It is estimated the route will remove in the region of 70-80% of the traffic currently passing through Adare daily, likely to be an immense relief to many in the town.
Even if it is approved next month it will still be quite a while before it arrives.

It is estimated that it will take up to two years for the first sod to be turned and after that the project — if it gets funding — will take around three years to complete.
Given that the Ryder Cup is coming in 2027, it could be a blessed coincidence — for Adare Manor Hotel and Golf Resort at least — or not.
Mr Keary said: “The village will be enhanced because of the main through traffic being taken off it.
“But it will also serve the Manor to a huge degree with motorway access.
“As I understand it, where the slip road is proposed is less than a half mile from the Manor entrance.”
Sean Collins doesn’t think it will have any serious impact on the Ryder Cup if the bypass isn’t finished by 2027.
“The Ryder Cup can happen without the bypass; of course it can,” he says. “There will be traffic management. They’ve had big, big things before in Adare Manor and they’ve always managed to get people in. “I was lucky enough to be invited to the K Club for the 2006 Ryder Cup in Kildare and people just got buses in.
“And that was more awkward to get to than Adare.”
According to submissions, there are delays of more than 30 minutes experienced with queuing extending for several kilometres on both approaches to Adare.
In his traffic analysis evidence to An Bord Pleanála on behalf of Limerick City and County Council, engineer Philip Shiels said traffic analysis assessment has demonstrated that the project will “substantially reduce the level of traffic on the existing N69 and N21 corridors”, as traffic transfers from these roads to the new road.
This will, he said, improve safety, journey time, journey time reliability, and safety benefits for all road users, as traffic is reduced through Adare, Kilcornan, Kildimo, Clarina, and Mungret.
In addition, Croagh and Askeaton, which are already bypassed, will also experience benefits in terms of safer access.
It is anticipated that the works will encourage more people to walk or cycle, as well as create the potential for public or private bus operators to use the new road for new inter-urban or expressway services.
He said it will, by 2039, lead to a 77% reduction in traffic levels along the N21 through Adare Village and up to a 40% reduction through the settlements along the N69.
Without the proposed bypass of Adare, major traffic delays would, he said, continue through the village during peak times with average speeds as low as 14 km/h projected by 2039.
Without the project, in addition, there will continue to be negative environmental impacts due to high traffic volumes through the villages along the existing N21 corridor at Adare and Croagh, and on the N69 at Kilcornan, Kildimo, Clarina, and Mungret.
And, he noted: “Several local roads are currently subjected to HGVs and cars trying to avoid the congestion in Adare. “This can often lead to increased speeds and a reduction in safety on these rural local roads. The removal of this traffic onto the project will result in local roads being quieter and safer for use by cyclists and pedestrians.”
There are, however, those who feel the project is a costly endeavour that will alleviate a very specific issue.
However, Adare resident Mary Brosnan said the move will not resolve the issues in the wider region.
“This is a hugely expensive proposal to alleviate Adare peak time only congestion, which certainly needs resolving,” she submitted.
“The proposed route merely shifts most of the current congestion and future increases into Newcastlewest and Abbeyfeale bottlenecks.”  Referencing the Ryder Cup, she notes the council’s application’s “covering letter mentions a brief golf competition as a major driver”.

That said, in the 600-word Adare Manor website press release on the announcement it is to host the Ryder Cup in 2027, the village it borrows its name from is not mentioned once.
Adare Manor, on the other hand, is mentioned 11 times.
To anybody with little more than a passing interest in this picturesque part of Co Limerick, they might be forgiven for thinking Adare is a very exclusive hotel and golf resort with a village attached.
Although it is very difficult to find anybody who opposed it at the time, a bypass — of sorts — was first suggested for the village more than 20 years ago.
According to Mr Keary: “About 20 to 25 years ago there were plans drawn up and approved to run a road bypass or relief road around the northern side of the village.
“Local people and local traders objected, and the plans were shelved. So, some of them are the architects of their own misfortune and now they can’t wait to have it done.
“But they thought that they would lose business because of taking a significant amount of the traffic off the village street and putting it onto a slipway or a relief road.
“They thought they would lose a lot of business.
“But it’s the opposite to that because if you were driving into Adare from Limerick or coming from Dublin if you are heading to Kerry for a weekend, you are unlikely to stop.
“You might say to yourself how you would love to stop at Adare, but by the time you get to Adare village, with the backup of traffic, you end up getting so annoyed and cheesed off that you just put down the boot and you drive on.
“That’s what is happening all the time.”
At times like the Easter break, he says, there is “mayhem” trying to get through the town.
“Similarly on the weekends, with people going into Limerick, going through Adare, going in to shop for this that and the other, traffic is just a nightmare.”
Luxury chauffeur and local taxi driver Pat Byrne will also be among those welcoming the bypass as it means he’ll be able to get to his fares in local hotels — Adare Manor included.
“It’s a hindrance to us at the moment because you can get a call from a hotel out the road maybe, and it takes you half an hour to get up and down because the traffic is crazy. It’s long overdue,” he said. However, he does see a few small drawbacks. “Some of the publicans will miss some passing trade. Take the Kerry footballers, for instance, they always stop in Adare on the way back from a Limerick game, but I’m just wondering, they might not stop now with the bypass, but that’s only a guess.”
Of its benefits, he sees it as not just something that will benefit Adare village but also much of the surrounding hinterland and beyond.
“There is no getting away from the fact that Adare village is a tourist destination and is extremely well known on the tourism map,” he said.
“But I think it will prosper because people would have more freedom to cross the streets.
“It will also encourage people in surrounding villages to come in and shop.
“There are also big plans being put in place for the development of a plaza and that kind of stuff, and architectural landscaping in the village to make it more attractive for pedestrians.”
He said if parking is upgraded when the bypass comes in, it will be a massive boost to the West Limerick economy, but more than that, it will improve journey time between Limerick and Killarney — by up to 50 minutes.

From the Irish Examiner.