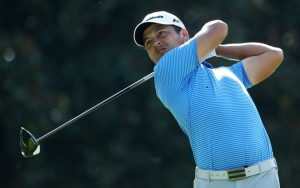 Xander Schauffele ended the 36-hole charity event on 10 under and a shot clear of Sam Burns; Shane Lowry finishes in third spot and Rory McIlroy posts a closing 68; Tiger Woods follows opening-round 77 with improved 74 ahead of The 150th Open

Schauffele followed a course-record 64 on the opening day with a two-under 70 on Tuesday morning at Adare Manor, mixing three birdies with a lone bogey and closing out his round with 11 straight pars to set the clubhouse target.

The Olympic gold medallist was then left to wait for several hours to see if any of the afternoon wave could match his total in the 36-hole contest, raising money for charities in Ireland, with Schauffele’s score enough to claim a one-shot victory.

Lowry was two off the lead with six holes to play and cancelled out a bogey at the 14th with a birdie at the par-four next, only to par his last three holes and end the week on eight under.

Rory McIlroy played his last four holes in four under, including an eagle at the par-five last, to end the week in tied-sixth and five strokes back with Rickie Fowler and Justin Thomas.

Woods, who used a golf cart to move between holes as he continues to struggle with the injuries sustained in last February’s car crash, made back-to-back birdies from the 15th but bogeyed the last to close a second-round 74.

« €28 million Foynes investment good for this region.Foynes bypass is “critical for the whole of the Mid-West region if not the country” »