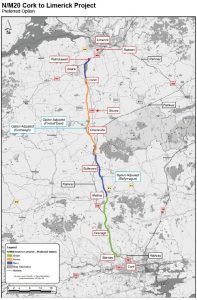 The route for the new €1 billion-plus Cork-Limerick road has been announced.

It will see Transport Infrastructure Ireland (TII) use 30-40 per cent of the existing route as it closely follows a corridor previously identified in 2011 before it was shelved due to a cutback in government programmes.

The route announced on Wednesday by TII will see the proposed new road follow the route of the existing N20 from Blarney north to Rathduff before departing from the existing route and taking a line east of Mallow with a new crossing of the Blackwater, downstream of the town.

The new route will involve further land acquisition north of Mallow as it travel east of Newtwopothouse and Buttevant before crossing the existing N20, north of Buttevant and continuing west of Charleville, Bruree and Banogue to link up with the existing M20 at Patrickswell.

A decision has yet to be taken on whether the new route will motorway all the way from Cork to Limerick with a speed limit of 120km/h or whether sections may be Type 1 Dual Carriageway which is broadly similar to motorway but has a 100km/h speed limit.

In all, the plan will involve the creation of just over 80km of new road from Blarney to Attyflynn in Co Limerick which will reduce travel times between Cork and Limerick by 20 minutes and is predicted will save approximately 60 lives over the next 30 years.

The project also examined a range of rail-based options and has recommended the development of a “no change” additional hourly rail service between the two cities, via Limerick Junction, reducing intercity rail journey times by over 20 minutes between Cork and Limerick.

At least 62 people have lost their lives on the Cork-Limerick Road since 1997 and last year TII published an analysis which found that road traffic collisions on the route were four times more likely to be fatal than on the average road in the country.

The TII analysis found that of the 87 collisions recorded on the N20 between 2016 and 2018, some seven of these involved the death of a road user and a further 13 collisions led to serious injuries while the remaining 67 resulted in minor injuries to road users.

Jari Howard, M20 Project Co-ordinator with Limerick City and County Council, which is the lead authority on the project, said at the time that the TII analysis also noted the high number of access points on the road, comprising 216 entrances to fields, 295 to houses and 114 to public roads.

“There are a total of 625 access points on to N20 or seven per kilometre which is quite high compared to other national roads so you have a lot of traffic exiting off and entering on to the road and that can be problematic particularly for anyone turning right and crossing a lane of traffic.

“It’s also a classic example of a legacy road with different cross sections so you have sections of motorway, dual carriageway with hard shoulder, single carriageway and you’re going through towns and villages so it’s changing a lot which is a particular challenge for anyone driving it the first time.

“You also have a situation where 42 per cent of the road has no hard shoulder or verge so there’s nowhere to go if you need to try and take evasive action and you have a couple of really nasty spots on it like the Ballybeg bends outside Buttevant which have been the scene of several fatalities.

“And you also have a high volume of traffic on it with many doing high speeds but then you also have a lot of slow moving vehicles like tractors and agricultural machinery as well as a lot of HGV so you get people trying to overtake so there are several factors making it dangerous.”

Further details of the road design can be found at www.corklimerick.ie.

From The Irish Times.