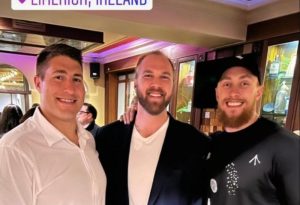 A host of NFL stars have touched down in Limerick this week ahead of a luxurious wedding taking place in Adare Manor.

Arriving on Thursday afternoon, various members of the San Francisco 49ers are in town to celebrate the wedding of Niners’ centre Alex Mack and his fiancée Rachael.

Numerous social media posts illustrate their approval of the venue, as well as the party’s attempts at Irish dancing and sampling pints in Bill Chawke’s.

Mack, a member of the prestigious All-Decade team in the NFL for the 2010s, had originally planned to get married in April 2020 but had to postpone the ceremony due to the pandemic.

Among his party are George Kittle, widely considered one of the best tight ends in football, who signed a five-year, $75 million contract with the California franchise in August 2020.

The 28-year-old holds the San Francisco 49ers record for being the first tight end to surpass 1,000 yards in a season, as well as having more receiving yards in his first three seasons than any other tight end in NFL history.

With him is his current teammate Juszczyk – the most-expensive fullback in the history of the NFL. He caught a touchdown pass in Super Bowl LIV against the Kansas City Chiefs.

They’re accompanied by Joe Thomas and Mitchell Schwartz – both of whom who know the groom from their time together on the offensive line of the Cleveland Browns.

Thomas is one of the most decorated offensive tackles of all-time, while Schwartz himself – currently a free agent due to injury – won the aforementioned Super Bowl against the 49ers just two years ago.

From the Limerick Leader by Andrew Cunneen 25th March 2022