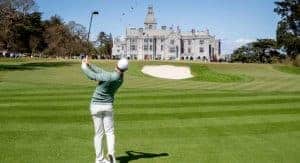 THE TRANSPORT Minister Eamon Ryan has committed to improving road and rail infrastructures in Limerick ahead of the Ryder Cup that will take place in Adare in 2027.
At a special meeting with Limerick City and County Council, the Green Party leader gave a firm commitment to building the Adare bypass to reduce traffic in the Limerick heritage town.
“We can’t have the Ryder Cup with traffic going down the main street, it has to be bypassed so that we can put on a proper show for visitors,” he stated at County Hall in Dooradoyle.
The trick with Adare, the Minister continued, is taking the “true traffic” out of the town, in order to use the “stunning space” that the village contains.
“Yes, we will put the bypass in, but my only request is to take the true traffic out,” he stated.
He also posited the possibility of a railway line to Foynes Port in the next three years, which would include stops at Moyross and Adare, ahead of the biennial golf tournament in five years’ time.
Cllr Bridie Collins, who has an address in Adare, stressed that each day, 25,000 cars pass through her local village. She asked the Minister if he was officially announcing the inclusion of the railway line.
“The Railway House in Adare is a brilliant station. At the moment there is no capacity to build there, so that structure needs to be looked at,” she added.
In response, Minister Ryan said that he was not officially announcing the railway line to Foynes through Adare but acceded that the project has been included in the National Development Plan (NDP).
The basis of his visit to the council, as he stated to councillors, was to establish dedicated acceleration teams within local authorities, to deliver certain projects in a quicker, more cohesive manner.
“I think that should be one of those projects,” he told Cllr Collins, who is currently vice-chairperson of the Adare-Rathkeale Municipal District.