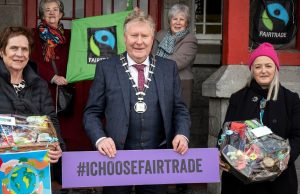 Two Limerick towns are looking to make the humanitarian leap in become designated Fairtrade destinations in support of third-world farmers and their families. Adare Tidy Towns and Newcastle West Tidy Towns are embarking on Fairtrade journeys to become Fairtrade towns.

Dolores O’Meara, Chair of Limerick’s Fairtrade Committee said that Fairtrade Fortnight is a “step in the right direction towards equality.”

She is encouraging Limerick people to look for the Fairtrade logo and put those items into their shopping baskets. Fairtrade embraces the United Nations Sustainability Goals which aim to end poverty in all its forms, everywhere, while leaving no one behind.

This ambition is central to Fairtrade’s mission which want to ensure that food producers and farmers have a living wage within their country.
For the next two weeks, starting February 21, hundreds of individuals, companies and groups across Ireland will come together as part of Fairtrade Fortnight to share the stories of the people who grow our food and are often exploited and underpaid. Vicki Nash, Chairperson of Newcastle West Tidy Towns said that becoming a Fairtrade town adds another dimension to the community as a whole.

“Many of our schools are regular participants in Fairtrade projects and I look forward to their support of Newcastle West’s Tidy Towns Fairtrade journey.”

“I am looking forward to Adare becoming a Fairtrade town and the support of the Adare community, businesses, visitors and tourists in making this happen.”

« No end in sight for traffic congestion in Adare.Adare 10K Sunday 27th Feb. »