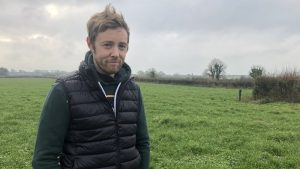 Farmer Colin Doherty is all in clover – well at least a lot of his 270-acre dairy farm outside Adare.

He’s been growing clover as part of his grassland management for several years now. It helps to reduce his dependence on imported fertilisers and to underpin the long-term sustainability of his 180-strong dairy herd farm.

But clover has a lot of other advantages, particularly for the environment. It takes nitrogen from the atmosphere which is then released to fertilise the soil, and animals produce less methane into the environment when they consume clover.

For Mr Doherty, the production of clover in his extensive grass pastures has a number of advantages.

“It is reducing our chemical nitrogen input, so that is reducing our carbon footprint. It’s also good for milk production and animal welfare. They do better on it, it’s very digestible and it makes our business much more sustainable and self-sufficient for the future as we are not relying on outside imports coming onto the farm,” he said.

Mr Doherty has been working with his Teagasc adviser Tim Doody, based in west Limerick, along with John Maher who heads up Teagasc’s ‘Grass 10’ project which is working with farmers across the country to convert them to growing clover as part of their grass management plans.

“We’re working with around 50 farmer groups across the country, covering around 900 farmers, educating them about the management of growing clover, and the benefits it can bring to their farms and the additional benefits it brings to the environment as part of our efforts to tackle climate change,” said Mr Maher. “Clover has the potential to have a huge impact on improving the sustainability of our enterprises, mainly because it has the ability to reduce chemical fertiliser inputs, improve animal performance, and that can lead to a massive reduction in the production of greenhouse gases. So it’s a win for the farmer, for the animals, and the environment,” he added.

Read the full article in the Limerick Leader by Cathy Halloran.

« Limerick retailers advised to remove Genrui-branded antigen tests from shelves.Samco Systems from Adare featured on Ear to the Ground on RTE 1. »