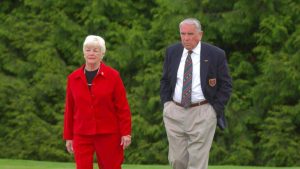 THE wife of the former owner of the Adare Manor, Judy Kane, has passed away in Florida.  Mrs. Kane passed away surrounded by her family in Jupiter, Florida where she had resided for the last number of years. A funeral service will take place Thursday, January 6, in St Patrick’s Catholic Church, Jupiter, Florida.

Mrs Kane and her husband Tom bought Adare Manor estate in 1987 from the Earl of Dunraven and are credited with turning it into a luxury getaway location.

The couple had a long association with Ireland before they acquired the castle – in the 1980s they owned a tenth of Dromoland Castle in Clare and two units of Ashford Castle in Mayo.

Mr Kane put in a bid of £2 million on the estate without even seeing it. The next day he was the proud owner of the manor and the surrounding 847 acres.

Adare Manor first welcomed guests in 1988 and accommodation was increased to 63 suites and rooms by the following year.

Mr Kane enlisted golf course designer Robert Trent Jones to turn the manor into a world class golf resort. The course was completed in 1995 and in 1998 a clubhouse and 25 town houses were built.

Mr and Mrs Kane lived in and managed the manor for many years with help from their daughters Diane, Linda and Teri. Teri (Cosgrove) resides in Ireland and was involved in the manor throughout the duration of the Kanes’ ownership.

The family sold the manor to JP McManus in 2015 and moved back to their native Florida where they have resided since.

A notice on RIP.ie reads: “Beloved wife of Tom, loving mother of Teri, Tommy, Linda and Diane, and deeply missed by Gerard and Daria, her grandchildren Frank, Grace, Alena, Conor, John and Lisanne, great-granddaughter Evelyn, friends and all those whom she met.

“Residing in Florida the past few years, Judy’s memory will be lived on by her friends, family and many memories shared by all at Adare Manor.

“Family flowers only please. Donations, if desired, to Operation Smile.”