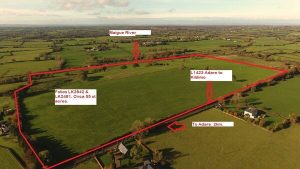 The area to the south of Limerick City has become something of a hotspot for agricultural land prices in recent years.

It always had the advantage of top-quality land of limestone base and rolling pastures that marked it out as one of the most fertile zones in the Golden Vale. But added interest from the non-farming and part-time farming sectors has added a premium to the prices in this area, where affluence meets agriculture.

“It’s very good land,” says selling agent Tom Crosse of GVM’s Limerick office. “I’d expect it to make around €15,000 per acre… There are places around Adare recently that have made up to €20,000 an acre.”

The properties that have hit the higher prices have tended to be the ones around 20-30 acres in size. At this level, they really attract the interest of the hobby farmer or the person looking for a good-sized property on which to build a house in the area and keep some horses; or even let out most of the land and still stay within a commutable distance of Limerick City. Even so, this is a property that could well exceed the expectation, such is the appetite for land locally.

“There’s good interest, and we’d be expecting offers on it shortly.”

There are no entitlements with the farm, which enjoys 500m of road frontage.

From the Irish Examiner.