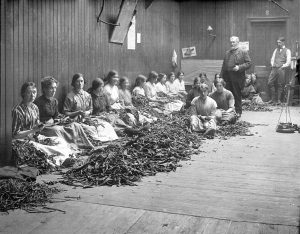 A tobacco factory was founded by Lord Dunraven, Sir Nugent Everard and William Redmond MP in Adare in 1908, which gave much needed employment to the people of Adare and the surrounding areas. The village of Adare was the nerve centre for the growing of tobacco under the auspices of the 4th earl of Dunraven. The factory was called the Adare Cigarette Company and was situated on his estate. (where the Wild Geese Restaurant is located)

Approximately 70 people were employed in grading the leaves into five different categories consistent with their excellence, each being used for a special brand of tobacco. The buildings involved in this enterprise covered almost four acres, with additional annexes in the process of being added during the First World War. Girls were also employed in the making of cigarettes, which were blended with imported Virginia, Turkish and Egyptian tobaccos. However, the importation of these tobaccos ceased during the First World War and with it the manufacture of cigarettes.

The cultivation of tobacco was not confined specifically to the east coast of Ireland. At the turn of the twentieth century and during the First World War, the cultivation of this crop was most prominent in parts of West Limerick where the land was suitable for this purpose, such as areas around Askeaton, Ardagh, Kildimo, Co. Limerick, and it was then transported to the factory at Adare. The Adare Cigarette Company sent the crop that it had accumulated during the war years to Messrs. Gallaher Ltd, Belfast, after its managing director had visited the factory. He is recorded as having stated that this was done to ‘give a helping hand to Irish industries in which he [Gallaher] takes the deepest interest’. It may, however, have also been due to the inability of the firm to import tobacco during the war.

Unfortunately, a fire destroyed the factory on New Year’s Day 1917, and it was never reopened.