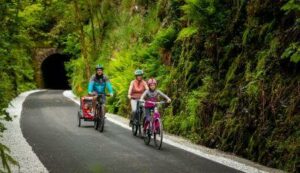 LIMERICK is set to feature yet again on Nationwide this Monday evening when Ann Cassin pays a visit to the refurbished Greenway.

The 40-kilometre greenway from Rathkeale to Abbeyfeale re-opened to the public in July following a €10m make-over and to date has been used by over 250,000 visitors, both walkers and cyclists.

The final section of the greenway, from Abbeyfeale to the Kerry border re-opened last Friday week.

The make-over, which was carried out by Limerick City and County Council, included resurfacing of the 40km stretch, as well as the establishment of a greenway hub at Barnagh and the restoration of the Ardagh station house and the Barnagh station.

Further hubs are to be developed at Rathkeale, Newcastle West and Abbeyfeale.

The Nationwide programme  is expected to include the old Station House at Rathkeale, now the Palatine History Museum, as well as the restored station house at Barnagh. Footage of the Barnagh Tunnel and Tullig Wood is also included along with some dramatic drone footage of the route.

The programme begins at 7pm on RTÉ One television.

From The Limerick Leader.