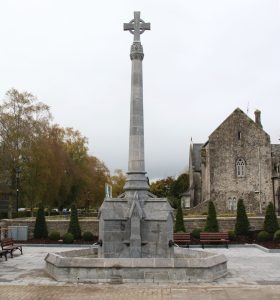 THE historic Countess Dunraven Fountain in the heart of Adare has been restored to its original grandeur following the completion of major upgrade works.

The freestanding carved limestone monumental fountain, which is located between the Holy Trinity Church and the Adare Heritage Centre, was erected in 1855 by Caroline Countess of Dunraven to thank the people of Adare who helped extinguish a fire in the nearby Adare Manor, 11 years previous.

The fountain is set within a cut limestone pentagon-profile basin with carved copings. It has a tapering four-sided obelisk style shaft surmounted by Celtic cross with carvings in relief and to the base. The plinth comprises projecting gables with trefoil and cross motifs and carved lettering in relief.

The fountain adds much historical and artistic interest to the village and it’s site, next to the Holy Trinity Church, is a prominent one and it contributes significantly to the streetscape of the village.

It was designed by Charles Hardwick who also restored the church.

Adare Tidy Towns worked alongside Limerick City and County Council to secure part funding for the restoration from the Department of Rural & Community Development under the Town and Village Renewal Scheme in 2020.

Commenting at the official unveiling, Mayor of the City and County of Limerick Cllr Daniel Butler said: “The restored fountain and public space around it will be a positive addition to the public realm of the village of Adare. The new accessible space, centred on the restored fountain, with new seating and lighting will be enjoyed by the local community and visitors to Adare for years to come.”

Gordon Daly, Director of Community, Tourism & Culture at the local authority added: “This project demonstrates how relatively small-scale projects can hugely benefit towns and villages. Adare is one of the jewels in the crown of Limerick’s tourism product and we must ensure that we continue to offer the visitor high quality attractions and public realm. It’s important that we work with communities to improve their areas.”

The total cost of the project was €220,000, €40,000 of which came from the Town and Village Renewal Scheme with the remainder from Limerick City and County Council’s own funds.

Liam Fleming, Secretary of Adare Tidy Towns has welcomed the completion of the works: “Our members and supporters are very proud of our contribution to the Caroline Countess Dunraven Fountain refurbishment project. We worked with Limerick City and County Council to develop the project plan and are delighted that Monument and Fountain are now once again restored to their rightful grandeur and the people of Adare have a wonderful amenity to admire and enjoy.”

« Adare based chef to appear on RTE cooking show tonight.New Limerick Greenway to feature on RTE One TV. »