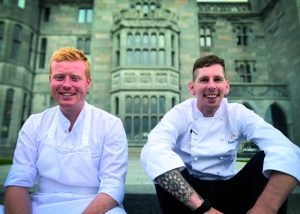 Adare based chef Mike Tweedie will appear on an RTE cooking show tonight.

The third episode of Beyond the Menu presented by Mark Moriarty will air at 8:30pm on RTE One this evening. Mark and Mike are pictured here.

Affectionately known as Lord of the Manor, Mike is the Head Chef at the prestigious Oak Room in Adare Manor. Before coming to Ireland from Devon, Mike worked in numerous Michelin starred restaurants with the Oak Room being awarded a star in 2019.  The episode will go behind the scenes with Mark finding out how a young man from the UK ended up in the most luxurious hotel in Ireland.

Mark will get suited and booted for a royal tour of the hotel before both chefs enjoy a round a golf while discussing what life is like in the kitchen.

They will meet local producer Kevin in Urban farms who uses a Korean farming technique , which is great for the environment.

The programme will also show how the team unwinds and bonds outside the kitchen and become a stronger, happier team because of it.

The lads will also spontaneously prepare a course for a deserving couple on the grounds of Adare Manor.

from the Limerick Leader including the photo.

« Previous PostAdare’s historic fountain is restored to its former glory »