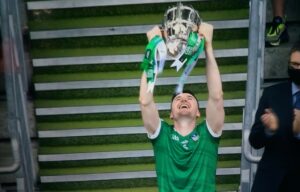 LIMERICK cemented their place among the greatest of hurling teams with a breath-taking All-Ireland final victory. In Croke Park it finished Limerick 3-32 Cork 1-22 for the county’s first ever back-to-back of All-Ireland SHC titles.

It’s a 10th ever title for the men from Shannonside on a special day to mark the centenary of the 1921 title win when the Liam MacCarthy Cup was presented for the first time.
John Kiey’s Limerick laid the foundation in the opening half had 13-points to spare by half time 3-18 to 1-11 after one of the great halves of hurling.
It was an opening half in which Limerick scored 3-16 from play across 10 scorers with just six wides.

Cian Lynch set the ball rolling after 10-seconds and the men in green never relented.
Gearoid Hegarty had the first of his two first half goals in the third minute but Shane Kingston did hit back straight away with a Cork goal as the sides were level on two occasions in an manic opening period.

Then Limerick took off with three successive points creating a gap for the first time on seven minutes.
Cork steadied and with back-to-back points, including their first from play on 13-minutes, they looked to have found their feet at 1-5 to 1-4 on 13-minutes.

Right on queue came a second Limerick goal – Aaron Gillane blasting low after Flanagan passed.
By the first half water break the advantage was five points – 2-8 to 1-6 and 17-minutes played.

So Limerick ‘won’ that first quarter by five points but were to ‘win’ the second quarter by eight points.
A run of five scores left it 2-13 to 1-7 and 25-minutes on the stopwatch – Peter Casey now up to five points from play and soon to be forced off injured.

The third goal came in first half injury time – Hegarty finishing the half like he started it with the sliothar in the net.
So 21 scores across the 37-minutes played for John Kiely’s men.
The lead was 16-points at the end of the third quarter but had been 18-points on 50-minutes.
Sub Graeme Mulcahy marked his 50th championship appearance with a point.
Cian Lynch had three in this period and it was his back-to-back scores that left it 3-26 to 1-14 on 50-minutes.
Either side of the water break Cork had four unanswered scores to reduce the lead down to 14 and they had five substitutions introduced.

But there was no denying Limerick’s supreme performance with subs David Reidy and Pat Ryan with late points.