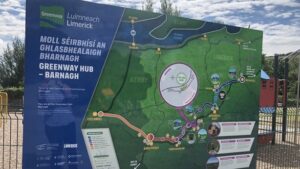 The Limerick greenway, described as one of the biggest outdoor and most transformative tourist amenity projects ever undertaken in Limerick, finally opens today.

Stretching 40km from Rathkeale (just 10 minutes from Adare) to Abbeyfeale it represents a €10m investment by Limerick City and County Council.

It is designed to open up west Limerick to new businesses and tourism potential, and will eventually link up with the Kerry greenway giving cyclists and walkers a new sustainable and completely accessible route all the way to Fenit in Tralee Bay, Co Kerry.

Built along the former Limerick to Kerry rail line, it was first envisaged 30 years ago when the germ of an idea emerged to build a Great Southern trail along the route.

What has emerged is a new three-metre wide resurfaced route, which also involved extensive restoration of two 19th century railway station houses at Barnagh and Ardagh, the renovation of the 115-metre long Barnagh tunnel, and the cast iron Fergusons Viaduct.

There are access and stop off points at the main towns of Rathkeale, Newcastle West, Abbeyfeale and Templeglantine and access to historic sites like Desmond Castle and Ardagh, which is the home of the famous Ardagh Chalice.

Limerick City and County Council Chief Executive, Pat Daly said: “Trojan work has gone into making the opening of the Greenway possible this summer despite the pandemic. Although construction ceased earlier this year, causing significant delays to timelines, our ambition for the Greenway never faltered. Now due to the tireless work of so many, we are delighted to open it this week.

“Stretching through the rural countryside of West Limerick, the Greenway will help to balance investment across the county and give a boost to areas beyond the urban draw of Limerick city. The towns of Rathkeale, Newcastle West, and Abbeyfeale already have so much to offer, and the Greenway will be pivotal in assisting them, and the region as a whole, to thrive and flourish.”

From an article by Cathy Halloran, RTE Mid West Correspondent.