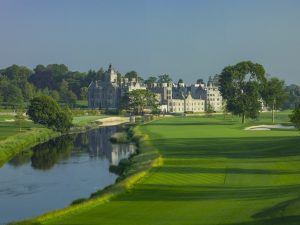 Hideki Matsuyama’s Masters victory wasn’t just big in Japan — it’s given golfers here a taste of what they’ve been missing as a return to play here finally appears on the horizon. Nothing compares to Augusta in April — but which Irish course comes closest?

The ‘new’ Adare reopened in 2018, following a complete makeover by Tom Fazio. The resort (owned by JP McManus) wants the course to become the ‘Augusta of Europe’ and, with Fazio contributing to the design of 14 holes at Augusta National, that is a genuine claim.

There’s no question that the conditioning of Adare is phenomenal — there is nothing like it in Ireland — and the greens and green complexes are mesmerising in their appearance and presentation. Sub Air systems — which they also have at Augusta —were introduced into these vast greens, allowing the greens team to control the moisture and speed of the putting surfaces.

Trees were cleared to open up the course and speed up play and, in another nod to Augusta, there is very little rough.

There are so many matching parts that Adare can certainly make a strong case for Ireland’s Augusta, especially with the River Maigue making such a dramatic appearance (just like Rae’s Creek). There isn’t as much colour here as there is at Augusta (or Druids Glen) and, again, the elevation changes are only pronounced on the magical 13th hole.

Personally, as much as I understand the idea that Adare could be known as the ‘Augusta of Europe’, I suspect it will be more a case of other countries wanting to boast that they have the ‘Adare of France’ the ‘Adare of Canada’ etc… especially after the Ryder Cup is hosted here. Aim high!

« Outdoor Dining Enhancement Scheme RevealedNow that we can travel within our own county…why not enjoy the Shannon Estuary, a short drive from Adare. »