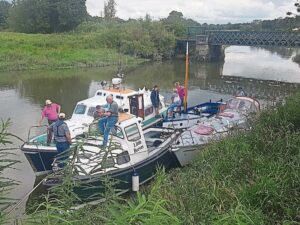 An informative historical perspective of Adare Quay has been produced by Kevin Cribbin, a member of the Restoration Committee, which has been formed under Adare Community Trust to restore Adare’s Turf Quay. The quay still survives today and retains original features such as the quay wall, limestone capstans and flagstones. It is now a car park.

It is planned to restore the quay as and amenity for the local community and for visitors, and as a living part of local heritage.

Initial work will include the removal of a relatively small build-up of silt, mud and overgrowth. Then install a pontoon to allow safe access for canoes, kayaks and small craft as per engineering advice and permissions.

In pre-famine times “the Shannon Estuary was a very busy river, teeming with traffic” including
fishing boats, cargo ships, ferries, Royal Navy ships, French Navy ships, smugglers and pirates.
The Maigue Navigation was established in 1700’s to serve Adare using the tidal lower Maigue as a
continuation of links that shipped goods and people between Adare, the Shannon Estuary,
Limerick and the upper Shannon for many centuries.

CLICK THE LINK BELOW TO READ THE HISTORICAL PERSPECTIVE