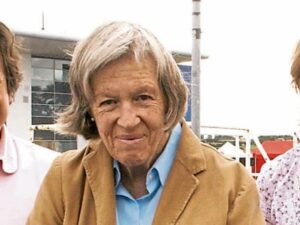 A LADY by name and by nature… Lady Melissa Brooke, of Ballymaigue, Croom will be laid to rest on Friday in Adare. She passed away peacefully at home after a long illness on January 5.

All strands of society in County Limerick were saddened at the news of her death. The daughter of the Earl and Countess of Dunraven may have been born into one of the most esteemed families in County Limerick but she had the common touch. For example, she was a regular visitor to farmers to thank them for allowing the County Limerick Foxhounds enter their lands when she was a Master.

Lady Melissa was as happy in the company of a blacksmith as a baroness and could converse as easily with both as she could saddle a horse.

Her son, Sir Francis Brooke, of Glenbevan, Croom, is Her Majesty’s Representative at Ascot and Chairman of the Ascot Authority while her daughter Emma is a Joint Master of the County Limerick Hounds. He said his mother had many friends from all “walks of life”. And what a life it was.

Born Lady Melissa Eva Wyndham-Quin in February 1935, at the age of five she, along with her sister Caroline, brother Thady and their nanny sailed to New York where they spent the rest of World War II living with their maternal grandmother. The rest of their childhood was spent in Kilgobbin House, Adare.

In 1994 Sir Francis said apart from the early years of marriage when his parents lived in Co Kildare, his father’s native county, Lady Melissa spent nearly all the rest of her life in Glenbevan, Croom, which she and Sir George purchased in 1963. She moved into a newly built house on the farm in 2001 which she named Ballymaigue.

“On my mother’s side the family has been in Limerick for hundreds of years. It’s in the blood,” said Sir Francis, who has fond memories of growing up there with his sister Emma.

“She was a great enthusiast. She encouraged me and my sister to do everything that we wanted to do and I think she was proud of our achievements. She was very proud of her grandchildren,” said Sir Francis. He and his wife Katharine have three children – George, Olivia and Sarah. Emma and her husband Charles Thompson, who were married in Adare in 1993, have two – Edward and Lara.

Perhaps one of Lady Melissa’s proudest days was the wedding of Sir Francis and Miss Katharine Hussey in 1989 which was attended by the Prince and Princess of Wales, Charles and Diana and a very young William and Harry.

But as stated earlier, Lady Melissa was as happy mixing with royalty as she was out hunting in mud-spattered jodhpurs, shooting, attending Limerick Show, Limerick Racecourse or gardening in Glenbevan.

“She was widely known. She was very active in hunting but also in lots of other pursuits. She fundraised for charities like the Samaritans and was very involved in local life.

“She loved people, she loved young people – she was a great encourager of the young. I could name any number of people who knew her, shop owners, farmers, people in garden centres because she was a great gardener. She was a very open, friendly person to everyone. And that’s the way it should be,” said Sir Francis.

Lady Melissa opened her garden every year to raise funds for the Samaritans. In her death notice it asks for no flowers but donations, if desired, to the same charity. Just two years ago Lady Melissa was the guest of honour, along with the Liam MacCarthy Cup, at a charity hunt in Ballingarry, organised by John O’Keeffe, for motor neurone disease and cancer charities.

Lady Melissa will be remembered for her warm and fun personality.

“Absolutely, she had a great sense of humour. She was a wonderful storyteller. She had a bank of stories that she could relay with great skill. She was fun and she enjoyed the company of people. She entertained very well and she did many things for other people,” said Sir Francis.

In an excellent obituary in the Irish Field, Leo Powell writes that in 1989 Lady Melissa joined the ranks of National Hunt breeders.

“She purchased three mares, one of whom, Derry Girl, went on to produce Mighty Moss, Bannow Bay and Far From Trouble, all top-class horses. Derry Girl is also the grandam of dual Welsh Grand National winner, Mountainous.

“Though she never bred a Cheltenham Festival winner, it took a pair of exceptional champions to deny her the honour. Istabraq beat Mighty Moss by a length in the 1997 RSA Novices’ Hurdle, while Baracouda denied Bannow Bay by a neck in the 2002 Stayers’ Hurdle. She had considerable success in the sale ring, usually selling her foals in November at Fairyhouse,” wrote Mr Powell.

Almost 40 years after her husband, Sir George, passed away, Lady Melissa has now gone to her eternal reward.

She is survived by her son Francis, daughter Emma, five grandchildren, sister Caroline, Marchioness of Waterford, extended family and many friends at home and abroad.

Lady Melissa will also be sadly missed by the Ryan family.

“Mick and Mary Ryan first came to work at Glenbevan in 1964 and were a great and loyal support throughout. Their daughters Marina Meehan, Helen Sheahan and Helen’s husband James now all work at Glenbevan. We are all part of one big family,” said Sir Francis.

Sadly, due to Covid guidelines only a handful will be able to attend Lady Melissa’s funeral but the memories of a life well-lived will last a lot longer than one day.

May she rest in peace.