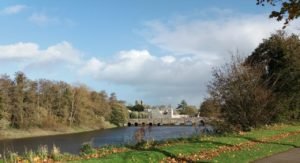 The number of walkers using the Adare Riverbank Walk has increased dramatically since the beginning of the year according to new figures released.

Limerick City and County Council has released the results of a survey which was carried out over a number of days last month- before the current level 5 restrictions were introduced.

A Report carried out for the Adare/Rathkeale Municipal District states that the majority of the pedestrians using the amenity were found to be walking in the direction of the Maigue Bridge and that the numbers were spread out across the day.

According to the survey, an average of 42 pedestrians were using the walk every hour between 9am and 5pm. This compares to an average of less than 10 per hour when a similar survey was carried out in February.

The local authority says that a one-way system was introduced along the Riverbank Walk because of Covid -19 and that the vast majority of walkers were complying with that measure. In February this was not the case as people were walking in both directions. Improvements to the footpath near the Dunraven Arms Hotel have also improved safety for pedestrians who are returning to the village having completed this scenic walk.

From a report by David Hurley of the Limerick Leader.