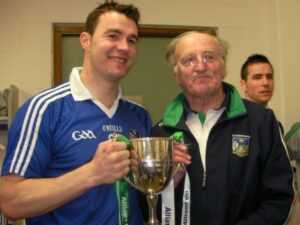 It is with deep sadness that we report the death of Doctor Mick Lucey RIP.

Tributes from across the sporting world have been paid to the late Dr Mick Lucey, the hugely popular 82 year old who passed away this Tuesday. A native of Bandon, Co Cork, Mick Lucey made Limerick and Croom his home for the last 40 years as the local GP.
Since 1980, Dr Mick settled and worked in Croom, involved with a host of varying Croom GAA teams and committees. His love for rugby saw him involved with Newcastle West and then onto Garryowen.
With the Light Blues, he was a player, captain, selector, president in 1978-79, trustee and honorary medical advisor to club teams.

“The news today that Dr Mick Lucey has died peacefully is really very very sad news, in particular for his family, but also for the rugby family in Garryowen and indeed across the country where Mick was widely known by so many of the rugby fraternity, of UCC, Munster and Ireland. Mick brought with him so much over a 60 year rugby career of all that’s good, from playing, to admin, to medical quick fixes and so much more that his passing leaves memories that will never be forgotten. After all, Mick was only our Club Captain, President, Trustee, Doctor and friend. Not Bad!! Rest in Peace Mick,” said Garryowen’s Frank Hogan in tribute.

His profession as a doctor saw him involved with Limerick GAA.
“Dr Mick Lucey was a massive part of the Limerick GAA family. He looked after me so well when I started out on the panel. He gave me a beautiful present of a stethoscope and medical books when I finished my final year in Medicine. He always said he would give me a start when I became a GP and it wasn’t an empty promise because he was always going out of his way to help others. Dr Mick would tell great stories of his time involved with Garryowen and Munster and other sporting circles. He would be in the corner of a dressing room before a big game with a word of encouragement or a quick story to lighten the tension in the dressing room,” said Limerick football vice captain Donal O’Sullivan, himself a doctor.

To his children, Mark, David, Stephen, Michelle and Caroline, we send our deepest sympathy.