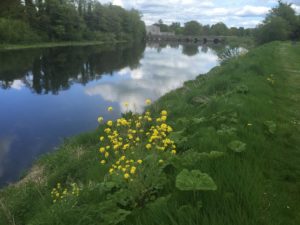 I TOOK a Sunday stroll around the village of Adare recently and it was buzzing with activity. The sun was shining, and a lot of people were around the street, sightseeing shopping and eating out. A good number were availing of the walkway along the banks of the river Maigue, out from the Station road and in by the Dunraven Arms. The Railway arrived in 1867, and the station house is still in good condition, but the tracks are overgrown, since traffic ceased in 1974.
Adare on the way out from Limerick city is the gateway to Kerry and has frequently been described as Ireland’s most beautiful village. To approach 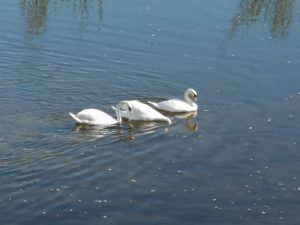 Adare from this direction is to approach it through woodland loveliness and through time. When we come to the bridge over the river Maigue, we know that somewhere along here, in the distant past, was the ford, with its great overhanging oak. That gave the place its name, Ath Dara, The Ford of the Oak. At the bridge the beauty of Adare suddenly reveals itself to you. Here, in the delightful setting of river and woods, you get your first view of medieval Adare.
That view upstream from the bridge must surely be one of the fairest in Ireland. Before you are the river , wide and clear flowing , with the massive ancient castle of the Kildare Geraldine’s rising in grey strength straight up 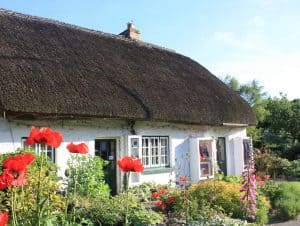 from the water’s edge. And a little further up , framed in the woods, stand the graceful ruins of the Franciscan friary, one of the three monasteries Adare once boasted of. This is the part of Adare that inspired Gerald Griffin’s lines about “Sweet Adare”

Nor summer sun, nor morning gale,

Adare’s three monasteries were founded by members of the Kildare family. The Trinitarian Abbey was founded about the year 1230 for the Trinitarian Canons of the Order of the Redemption of Captives and was the only house of the Order in Ireland. After its suppression at the time of the Reformation it gradually fell into disrepair. In 1811, however, part of the building consisting of tower, nave, and choir, was restored by the first Earl of Dunraven, and given to the Catholics of Adare as a parish church, a role it still fulfils.

The modern village of Adare , with its wide street and groups of thatched cottages, its village fountain and village hall and its restored monasteries now used for church services, is very largely an early 19th century creation of the Dunravens. It has been said that the village has an English look about it, yet it has a character that is unmistakably Irish. The people of Adare are justifiably very proud of their village, so neat and so picturesque.