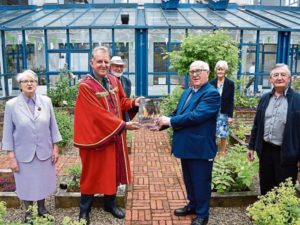 The pictorial history of the Geiptine Singers from Askeaton, produced during the lockdown has proven to be a sell-out. The last copy was presented to Mayor Michael Sheahan on Friday last at City Hall in Limerick.
Ailish Cassidy, Pat Lynch, Breeda Kelly, Pat Kenneally, Pat Buckley and Pat Lynch, and other members of the group who have been performing for the past 50 years, met with Mayor Sheahan at City Hall.

Secretary Breeda Kelly said a second printing will be considered but copies will have to be pre ordered and pre-paid.

The launch of the book was of necessity a virtual one carried out two weeks ago by long-time associate of the choral group, Nora Hawkes at her home in Cappagh, as she celebrated her 100th birthday in style and enjoying the photos in the publication.

« The Reopening of Raincín’s Newsagency.Ryder Cup at Adare Manor put back by 12 months »